When we first learned that we got accepted to TNW’s Boost! conference, our excitement was quickly followed by a challenge: how to raise enough money to make it to NYC and take full advantage of the opportunity. That’s when we decided to throw a fundraiser. Only we didn’t want to throw a traditional fundraiser, because we love our community and much of our community is scrappy, just like us. So that left us planning an event for folks who aren’t traditionally invited to fundraisers—fellow boot-strapped entrepreneurs like ourselves and students—as well as our gainfully employed friends. Thanks to Constant Contact, SoftLayer Catalyst, Venture Business Centers and DeskHub Portland we could do just that. Their contributions for an awesome space, drinks and food allowed us to focus on collaborating with equally awesome professionals and local businesses to throw a party we’d all enjoy.

In a few short weeks, we rounded up an impressive and exciting list of donations for a silent auction and raffle, including free coaching & consulting sessions, acupuncture, a signed Timbers t-shirt, mobile work gear, gift boxes, hand made cross-stitches, homemade cupcakes, cool co-working accessories and gift certificates to local food shops, coffee shops and co-working spaces. A friend lent us his PA and another friend DJ’ed for beer. We named it a “Portland Startups Booster Party” because we wanted to celebrate all startups … Portland has an active and creative community but sometimes I feel like we’re disjointed. There’s cliques. There’s agendas. So we invited other startups to an area we called the “Lounge” to encourage more interaction and discovery. We’d never thrown a fundraiser before, but we thought we had it well planned and gave ourselves some “buffer” time the day of for the expected unexpected to happen. Darren kicked off his morning making wings and I started with potatoes and general prep of all the food I’d sourced the night before. The plan was simple: Faye and I would head down to the space at 2:30pm and setup the space. Darren would arrive at 4 with the beer, his food, cups, plates, silverware and iPad setup to process credit/debit cards. Our DJ and the game guy would setup around 4:30 and Community Lounge participants would start setting up as early as 4:45.

To our first surprise, early comers started rolling in around 4:30 and help us setup while Darren was held up at the keg place. I’d told the DJ our party started at 6 instead of 5. And I hadn’t yet printed out the silent auction forms. When the crowds started rolling in AT 5, we had food, wine and sodas but nothing to eat it with or drink it from. We could only take cash donations and when the iPad arrived, it didn’t have a card reader attached. That was 5:30 and by then our space was filled with friends and chatter … waiting for us. Folks could finally eat and within minutes of Bounce ‘n Battle being setup, we had players all night! Luckily, one of our guests (and now new friend) offered to run back to her car and lend us her Square card reader for the night. (She’s a professional errand runner and we can’t recommend her enough!) We decided to draw door prize winners every hour, so folks wouldn’t have to stay 4 hours to win, and quickly learned how much time it takes to call out winners. I felt like I was running a bingo night! By 7 we had our silent auction sheets out, hand-written. We gradually enhanced the sheets to properly call out how awesome the prizes were—and the people behind them—and if we ever do this again, we will print them off before hand! A bidder explores the silent auction.

At some point, folks discovered the “kids lounge” filled with photo booth props and began dressing up in fantastic attire and snapping hilarious photos. An unofficial GAME TABLE tournament emerged and Ariel was poised to be the winner … but out of nowhere, Darren managed to unseat her. I wish I’d gotten a picture of Darren with his parents because, oh yeah, they drove up from Corvallis to join us! All of our collective family who could make it made a point to pull us aside and tell us what a joy it was to see us in such great company. All in all, we raised $4,500 from sponsors, donations at the door and online from folks who couldn’t make it, and the raffle/auction. The party itself cost $900 for food, drinks and the Bounce ‘n Battle. That left us with $3,600 for Boost! We’ve already booked our flights ($1,000) and are planning on being in NYC for a full week so we can attend the conference, host a co-working meetup (more on that coming soon!) and connect with partners and community members in the area. Assuming we can find couches or other affordable lodging, we’ve budgeted $1,100 for collateral and swag … some of which we’ve been needing for a while, like better stickers and cards for our ambassadors.

Another thanks to everyone who contributed, including all of the attendees and everyone who donated from afar! 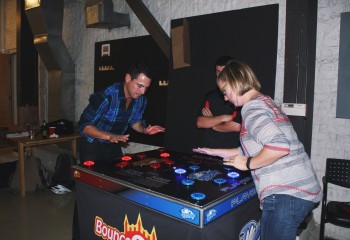 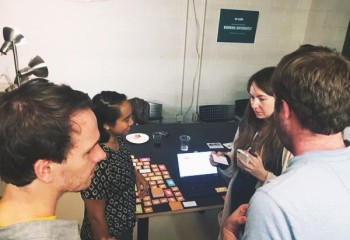 @JoeB_PDX via Twitter: That @gocardsmith table getting a lotta lookers. 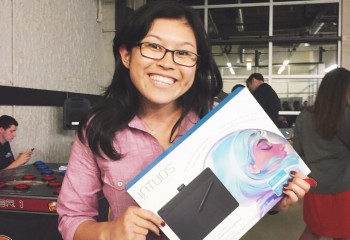 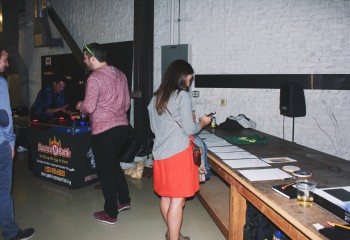 A bidder explores the silent auction. 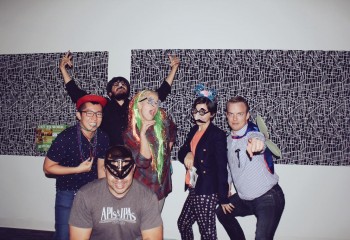 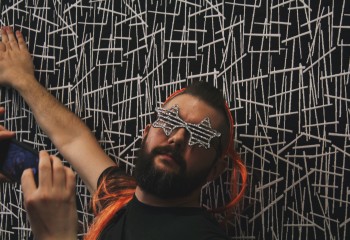 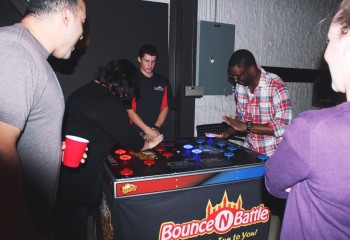 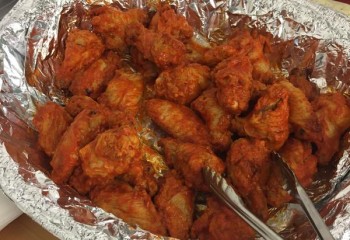 @kronda via Twitter: I’m not saying I only showed up at this @workfrom party because I heard @darrenbuckner made these wings but… 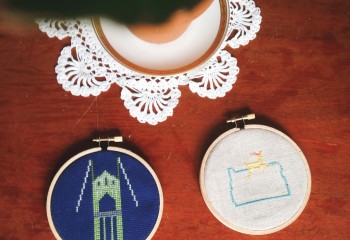 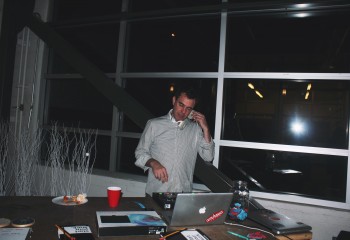 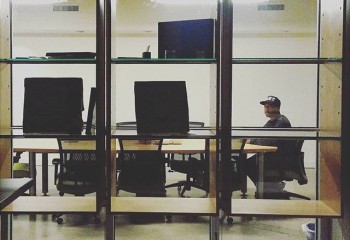 @chopfire via Instagram: Thanks to @workfrom & @deskhubPDX for opening the doors and plugging me with this great new workspace, looking fwd to creating here. 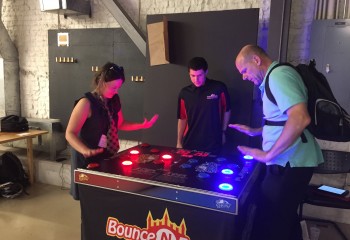 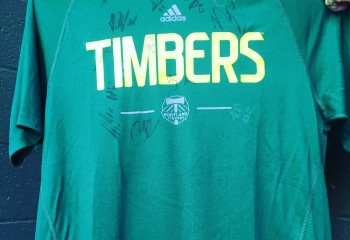 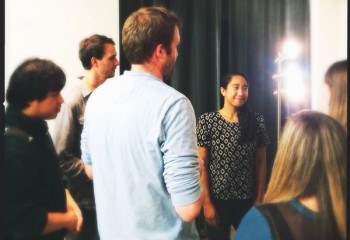 
Want to throw your own Startup Booster Party? Check out our top tips for making it a success. 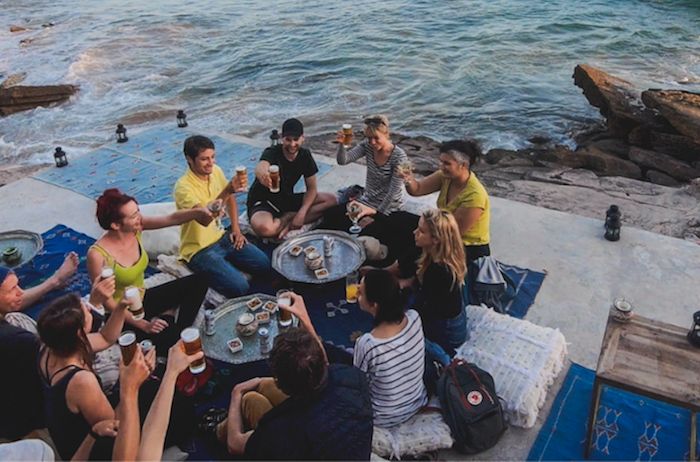 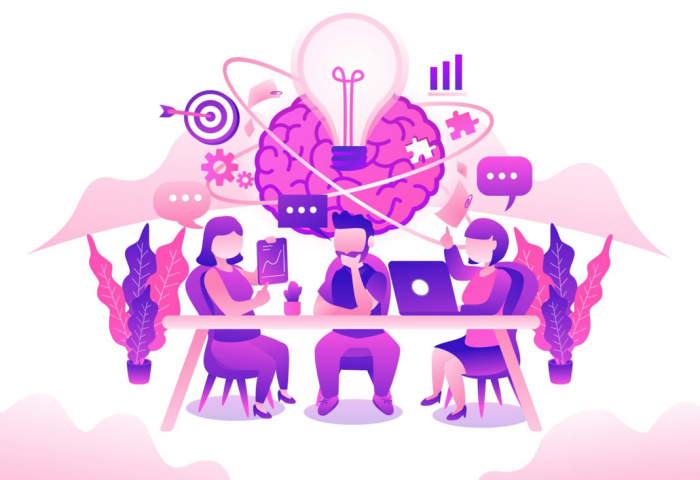 7 ways to use brainstorming to keep your remote team engaged 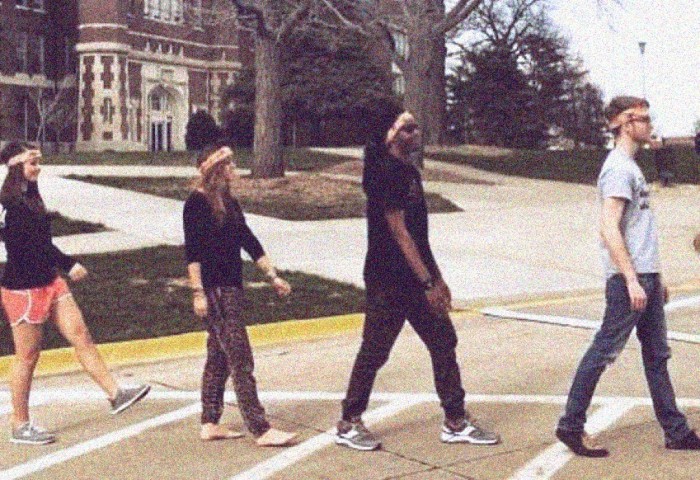